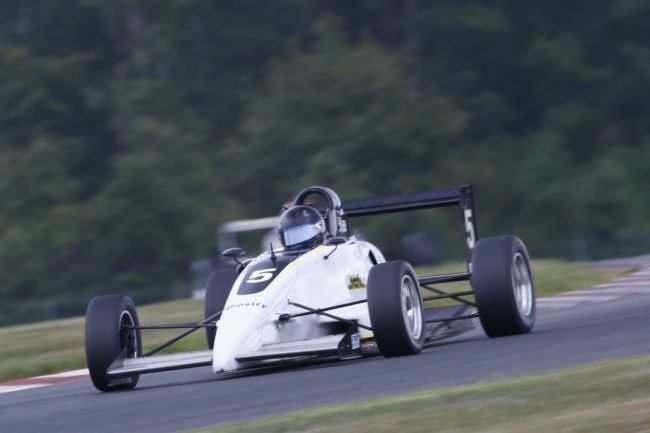 Under gloomy skies, the final qualifying session of the 2019 season was conquered by Brandon Dixon.

In overcast conditions the F2000 Championship competitors rolled onto the the drying New Jersey Motorsports Park circuit. Before the drivers could really get up to speed, a black flag all stopped the session. At about the eight-minute mark the track was clear and the competitors rolled back out.

Thirteen minutes in, yesterdays race winner, Brandon Dixon is up to pace. He’s the fastest driver on track. Brenden Puderbach, after a long hiatus from F2000 Championship Series competition, is starting to find some rhythm again. He’s second fastest, but only marginally so over third place Peter Gonzalez.

At the halfway mark, Gonzalez starts to find his pace from yesterday. He jumps into second, thus relegating Puderbach to third fastest. Moments later, John Dole does the same, Dole is third fastest and Puderbach again loses a spot on the grid.

With then minutes remaining Gonzalez heads to the pits. His qualifying effort is over, his time is good for second place for the time being. Dixon is still on pole, nobody looks capable of beating his time. John Dole is still plugging away, he’s improved the last three laps, he could be a threat to Gonzalez.

With just a few minutes left to run, Dixon finds his way to the pits. His pole position won’t be challenged, and he will start on pole for race two. Gonzalez with start second, John Dole third, Brendon Puderbach fourth, and Mike Pepitone will line up fifth in the sole Pinto powered car.